My review of "My Week With Marilyn" 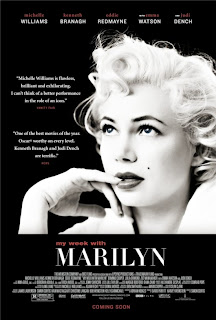 First of all, I think Marilyn Monroe is one of the most overrated people of all time.

If there's one very negative thing about this film.. it's just that I'm probably not alone in wanting to have more than a week with Marilyn. It just becomes "a week".. even though you'll get to see most of what Marilyn Monroe was about, it's still "just a week".

That's most likely one of the issues people have with this film. I for one, think it's very interesting, but even though staying true to the two books it is based on, it is still more about Colin Clark, the main character in the film played by Eddie Redmayne. I figure people would much rather want a complete Marilyn Monroe biopic, from rise to fall. I personally would have loved it!

Another thing, Michelle Williams. She is someone you'll either love or hate.. and I personally think no one has any right to hate her. Look, Marilyn Monroe was a complex character and frankly someone it must have been hell to play. Michelle Williams took an incredible "stab in the dark" here because she could have made a complete fool of herself. I think she did it brilliantly, she played a complex Marilyn, we get to see Marilyn the addict, Marilyn the diva, Marilyn the vulnerable and she actually brings a lot of warmth to her portrayal. Michelle Williams actually makes Marilyn a person you can't help but love, no matter if you did like the real Marilyn Monroe or not. Michelle just becomes Marilyn, her manerisms, flirty personality etc. A VERY deserving Oscar nomination for Michelle Williams. She just had a card up her sleeve and that card is her performance in this film. After seeing her portrayal it is hard to imagine someone else having played the role.. It's called acting, you can't say her voice isn't close enough or her looks or whatever.. I truly believe Michelle Williams did all in her power to do Marilyn justice..

I have to say I didn't expect much from this film, I didn't really have any expectations for this film.. but it's actually surprisingly good.. other than Michelle Williams, the cast is brilliant! Julia Ormond who is brilliant as Vivian Leigh. Kenneth Branagh as Sir Laurence Olivier who he got an Oscar nomination for playing in the category of "Best Performance by an Actor in a Supporting Role". You can also see Emma Watson, who's adorable as always. Toby Jones, who has the funniest lines. Dougray Scott, great as Arthur Miller. Dominic Cooper, Dame Judi Dench and Zoe Wanamaker.

It is more of an independent film so don't expect any big Michael Bay kind of explosions or anything.. but it's truly a joy to watch. I personally love biopics, especially on actors and actresses. It is my dream to play someone in a biopic actually. I just think it's cool to get to play someone who is or has been alive and getting to do all research, looking up a persons old work, interviews, personal life etc.

But if this "little" independent film can create TWO big Oscar nominations in the most important categories, which is for acting, then how bad can this film really be?

By the way.. this film is about a young man named Colin Clark who gets to work as a third assistant director on the set of the movie "The Prince and the Showgirl" shot in England starring Marilyn Monroe and Sir Laurence Olivier. Colin is to resist the sexy flirts of Marilyn Monroe. That's it, that's the plot, try to not think of what might go wrong...

This movie surprised me, it has a lot of magic to it.. maybe because the reenactment scenes from "The Prince and the Showgirl" were actually filmed at the very same soundstage as the original film was filmed on...

It's worth a look! And frankly, didn't get the attention it deserves, other than the Oscar nominations of course.. It might be a little dull at times too...

Robert Holik
Actor. Comedian. Director. Mostly I want to act and entertain people. I would travel all around the world for acting and a chance at it. I know it's not all grammatically correct, I'm trying my best here but I'm not from the US and I also speak 6 other languages. - Also, if you have any questions or a film you want me to review, you can send off an email to me at: robertholik@gmail.com